Diana Fasano hasn’t had a lot of time to decipher all that has happened over the last seven weeks.

Instead, she’s doing what is natural, and that’s coaching softball at her alma mater, Immaculate Heart Academy.

It was Fasano who had the task of telling the players on Feb. 4, 2016, that beloved head coach Anthony LaRezza had passed away. As she said subtly, there were no adequate words.

With the start of the 2016 season just a month, to the day, of losing its coach, Immaculate Heart made the right decision, quickly, in naming Fasano its new head coach.

“Anthony always said to me, ‘get comfortable with being uncomfortable’.” said Fasano on March 19, after her team had scrimmaged at Arthur L. Johnson High, in Clark. “We had talked at his 50th birthday party (in January) that maybe I’d take on more of a role, with him continuing to recover, especially early in the season. I always said my role, as a coach, would always be here, as Anthony’s assistant.

“Obviously, no one expected this. But knowing Anthony, he’s laughing at me, somewhere, as I take on this position.”

Fasano’s roots at IHA are deep. She was graduated from the Bergen County school in 2000, and was a standout softball player. At the time, LaRezza was an assistant to head coach Jeff Horohonich. 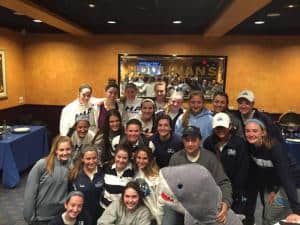 IHA players got together to celebrate Ed Bates’ birthday on March 18.

Fasano would return to her alma mater in 2009, as LaRezza’s assistant, and helped the Eagles win the Non-Public A championship in dramatic fashion to conclude an unbeaten season. IHA would win another state championship in 2012, then added one for the ages in 2015, with a team comprised totally of underclassmen and the image of LaRezza celebrating the game-winning run in the state final indelible in the hearts and minds of IHA players, coaches and fans. 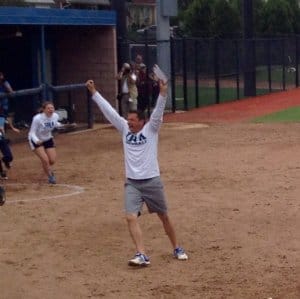 When Reagan Jones scored the winning run in the Non-Public A championship game on June 6, 2015, at Kean University, LaRezza’s exuberance was obvious in this classic photo, taken by Sean Reilly.

Now, Fasano takes over a team that could have been fragile, but instead is embracing the challenge.

“With this team, there are mini coaches on the field,” the coach said. “In a way, it’s kind of a balancing act. We have 19 kids. But like I told them, it comes down to the fact that the 10 best players will play. There’s an inner-competition to get playing time.

“We’re playing softball. It’s supposed to be fun. That’s all it ever was with Anthony, and that’s the way we’re preparing for the season. Are we playing now, for a little more than what we expected? Yes, for sure. But being on that field is a release for all of us. It’s an outlet for me.

“And these kids love to play the game. They want to get better with every practice and every scrimmage.”

Following a scrimmage on March 18, at home, the players, parents, coaches and fans ventured to a local eatery to celebrate a birthday for one of its favorite fans, Ed Bates. And at the party were LaRezza’s three older brothers, Joe, Allen and Billy. 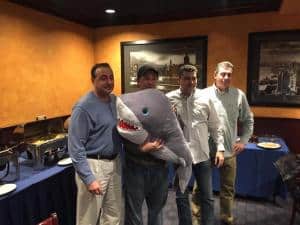 Ed Bates (second from left) is joined by Anthony LaRezza’s brothers, (left to right), Joe, Allen and Billy at a team gathering on March 18.

“It was an incredible night,” said Bob Jones, whose daughter, Reagan, now a junior, scored the game-winning run in the state championship game last year, as IHA edged Notre Dame of Lawrenceville, 1-0.

“The kids were really happy to see Anthony’s brothers. I don’t think his brothers realized the impact that Anthony had on the softball community, as a whole. Anthony was never the type to talk too much about his coaching accomplishments to his family, so I truly think they were stunned by all the outpouring.” 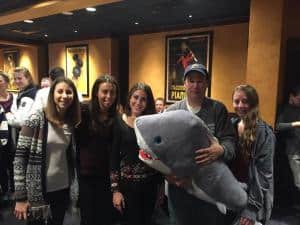 A fun time was had by all at an IHA party, with Ed Bates enjoying his birthday.

A video was then presented, highlighting LaRezza’s coaching and influence. (You can see the video by clicking on this link….https://www.youtube.com/watch?v=WH43q0etqlc&feature=youtu.be)

“There wasn’t a dry eye in the place,” said Jones.

The parental support during this time has impressed Fasano.

“The parents have been tremendous,” said Fasano. “Just the little things they do, being at scrimmages, supporting their kids, and coming up with ideas to honor Anthony. They just want to help, but they also want their daughters to be happy and enjoy the opportunity of playing softball.” 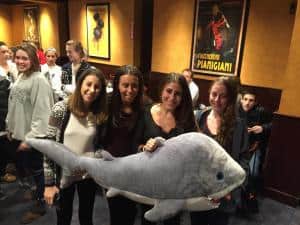 Flippy got the royal treatment from the IHA players. (All photos courtesy of Bob Jones)

Sentimentality aside, Fasano knows the reputation that is IHA softball.

“With Anthony, he’d always down play a season, but we’re aware of what is expected here,” said Fasano. “It’s about a tradition of winning. We appreciate that. I know Anthony had said last year that the team might struggle, but I had said then that I thought last year’s team could be special. And I think we have the capability of being good again this year.

“But we have to keep working hard, and getting better. We all want this, together, as a team. It’s what makes this group so special. We have hard-working players, who don’t let up. No one is bigger than the team, and the kids love that.”

And the impact of Coach LaRezza will clearly define Fasano, in her first venture as a head coach.

“Are you kidding?” she said with a laugh. “He’s with me, every step of the way.

“No doubt about it.”

Source: Fasano, always at home at IHA, is guided by LaRezza’s laughter, intensity and love of the game; A birthday bash for Ed Bates becomes a night of recollection, as Anthony’s brothers Joe, Allen and Billy visit team | Mike Lamberti, From Margate To Cleveland,