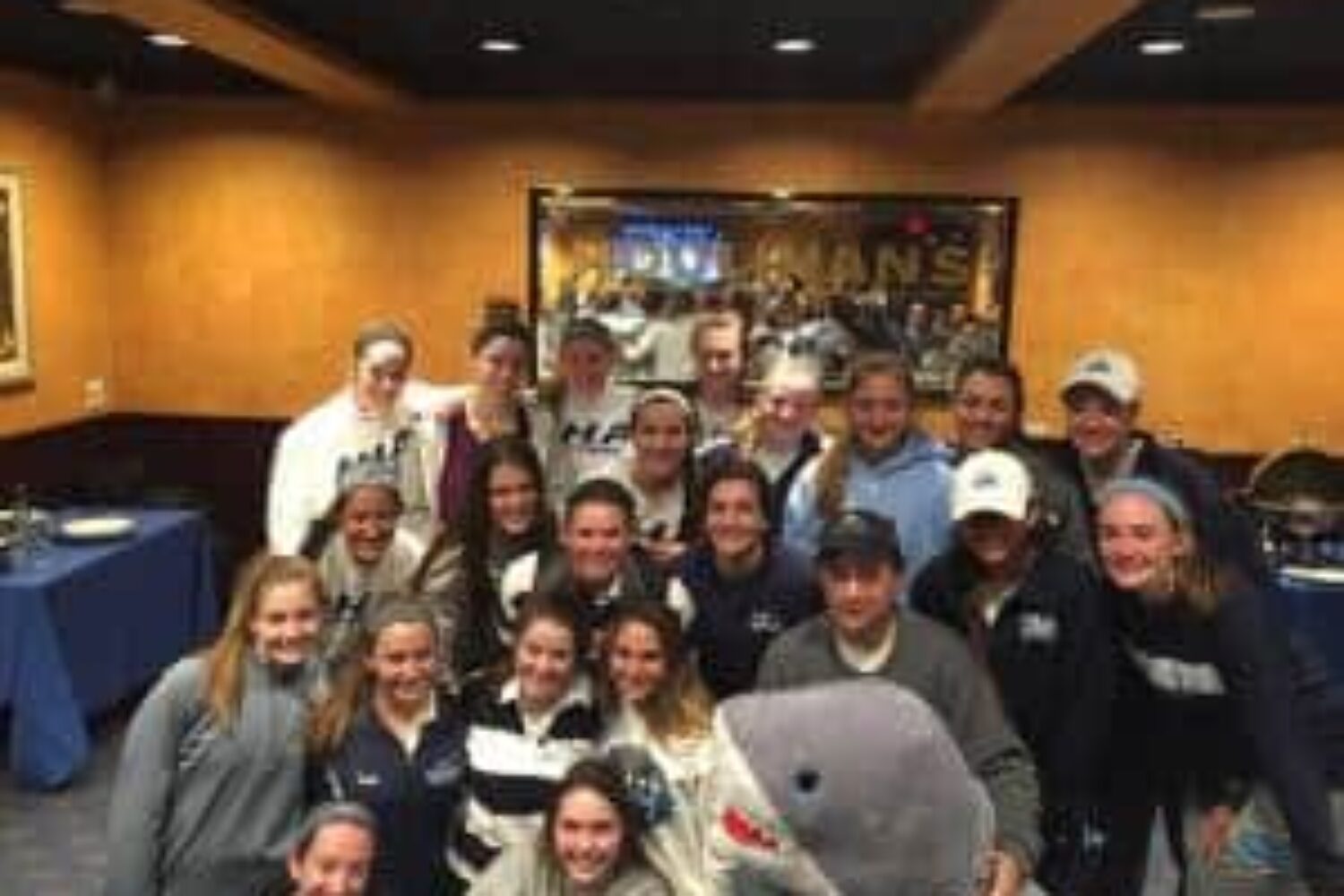 The story has been well documented. The passing of Anthony LaRezza on Feb. 4, 2016, left the Immaculate Heart Academy community devastated.

But through the grief, the Eagles knew a season was rapidly approaching. The quick appointment of assistant coach Diana Fasano was well received throughout the state, as well, of course, from the IHA players and parents.

Joe LaRezza, far right, joined the Eagles after the Bergen County championship game. Joe has been a regular at IHA games this spring. (Click on all photos for larger images).

But there was still that question as to how the team would perform, once practice started, a month to the day of Anthony’s passing. And then, there was that first scrimmage on March 11, when Demarest came to IHA. Now, bear in mind, this was a scrimmage, on a chilly late winter afternoon. But walking into the facility, you could hear the kids cheering, during infield warm up time.

Lisa Kenerson (center), with her daughter, Taylor (right) and Olivia Sprofera, has been a regular at IHA games, along with so many other great parents.

And when that scrimmage started, there were parents, EVERYWHERE, just watching the game. Bob Jones would be in his usual perch, away from most, watching his daughter, Reagan, play third base. And there were the Kenersons, the Siclaris, the Sproferas, the Sharmas, the Carrs, the Guevarras, the Cieslaks…and it can go on, and on.

Parents watching a meaningless scrimmage, because that scrimmage, and the ones that followed, was far from meaningless. It was about taking care of a loved one, supporting a daughter, a niece, a God child, a friend.

Bottom line was, they were there. And they’ve been there, for every game. Sevan Sprofera’sfamous pacing, with every pitch, should elicit a tee-shirt one day. (I Liv and Let Liv, with every pitch).

There was opening day, at Paramus Catholic, with all that emotion, then the home opener, when the LaRezza brothers threw out the first pitch. And then the IHA Tournament, now named after Anthony, and a nice speech by Newark Academy coach Serg Rodriguez, imploring the Eagles that it was now time to just play softball.

“Anthony wouldn’t want all this attention,” paraphrased Serg. “You can play better, and I can coach better.”

And the team has been phenomenal ever since. They’re 25-1, entering this week’s action, with a 24-game winning streak. They’re the top seed, and defending champions, in the upcoming state tournament.

Joe LaRezza, here with some IHA friends, after a big win in Saddle Brook.

And, once again, IHA is the Bergen County champion.

It’s been a tough winter and an emotional early spring, but Serg set the tone on April 10, when he said it was time to just play softball again. And Fasano’s near-perfect approach, of when it get on her team, and when to lay back, a little, has been monumental.

It’s been a team effort, through and through, for IHA in 2016, as it always has been, but maybe never understood as much as this year.

Newark Academy coach Sergio Rodriguez’s talk to the IHA players on April 10 helped set the tone for the season.

“The parents have been incredible,” said Fasano. “I played here, and they’ve always been supportive, but this year, it’s different. I’m so happy for these kids, in winning the county tournament. They’ve been through a lot.”

When the season ends, the IHA players will have a chance to catch their breath and remember The Big Guy, Anthony LaRezza.

The coaching at IHA is in good hands.

And as they get older, they’ll look back at the special assists of the IHA community, parents, administrators, coaches and fans.

Talk about a team effort?