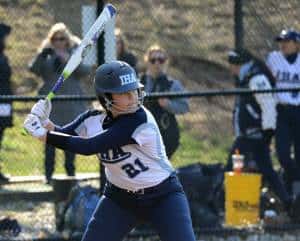 All of the Blue Eagles who experienced that 6-2 defeat are back. They remember what it felt like. They want to make sure it doesn’t happen again.

“Last year, it left a bad feeling,” coach Diana Fasano said. “So you want to leave everything out there.”

IHA has shown that through its county tournament run this season. Junior left-hander Olivia Sprofera has been dominant, and the Blue Eagles have been giving her plenty of run support.

Third-seeded Immaculate Heart, which plays No. 15 Dumont in the semifinals Saturday at Indian Hills at 2 p.m., is playing its best softball of the season. And that’s saying something considering the Blue Eagles (21-1) have played well all year.

Immaculate Heart won its 20th consecutive game when it defeated Mahwah, 5-0, on Tuesday.

But IHA’s lineup has been producing, top to bottom.

The Blue Eagles have not only been getting on base consistently, but they’ve been taking advantage of those opportunities, too.

“It’s a mental approach of hitting,” Fasano said. “I feel like we’re turning a corner here, and we’re playing good softball at the right time.”

Combine that with Sprofera’s dominance in the circle and her teammates making big plays behind her, and the Blue Eagles are a team that’s on a roll.

“You get in a comfort zone, and then you can feel free that you’re not hanging on every pitch,” Fasano said. “When we have run support, she’s even better because we can kind of open up the zone and we can use different pitches.”

There’s never an easy game for IHA, either. Every opponent brings it best each game. But the Blue Eagles are accustomed to that by now.

They haven’t succumbed to that pressure. Instead they’ve continued to improve.