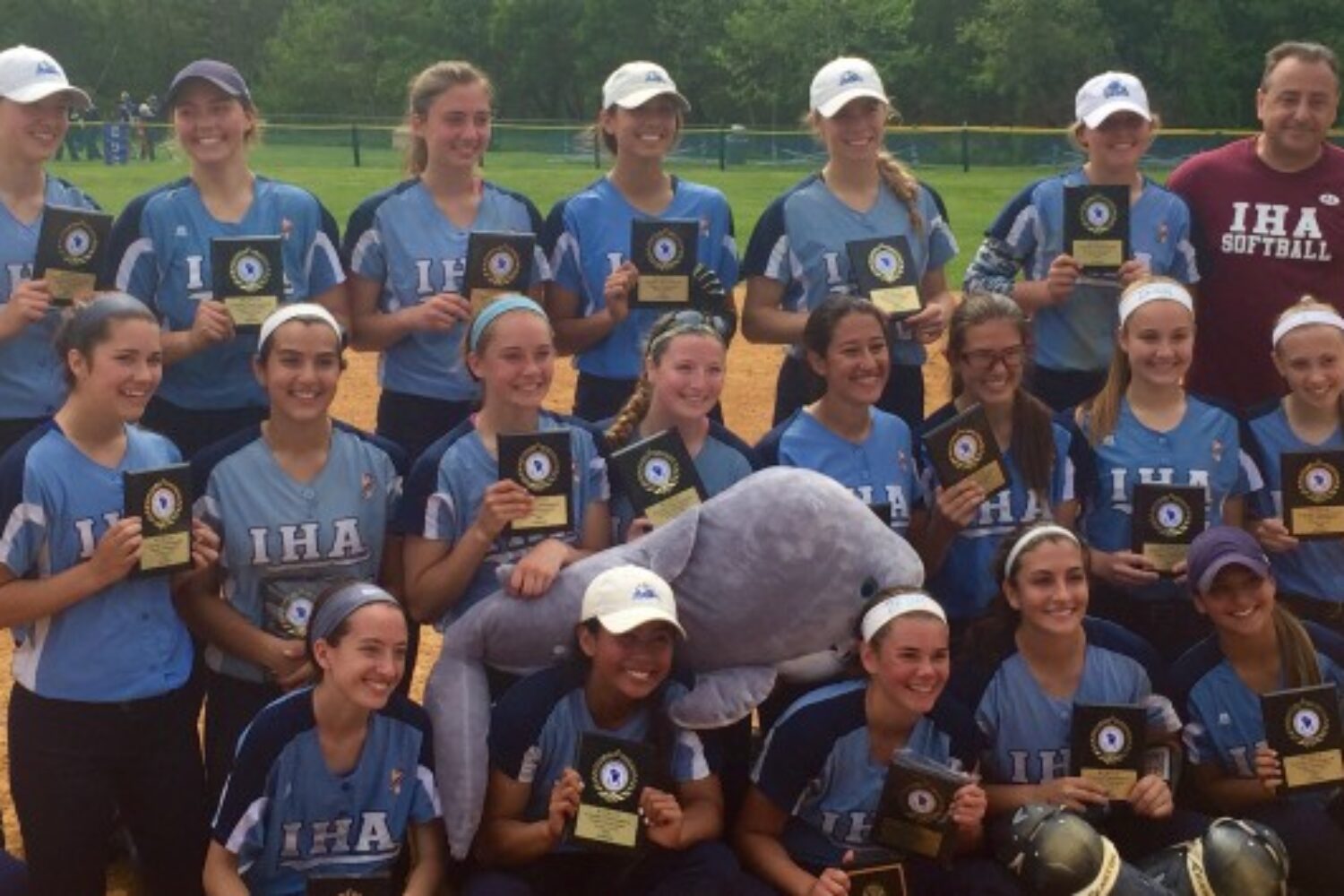 Reese Guevarra’s approach to hitting is well known. There’s that traditional leap at the plate, before she steps into the batter’s box. The ‘my hair is on fire’ approach to playing the game clearly motivates her teammates, especially as the Immaculate Heart Academy’s leadoff hitter. Batting lefthanded, she’s almost impossible to throw out at first base, and will sometimes slide into first, making it even tougher to catch her. 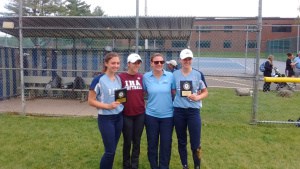 A great moment of IHA players and coaches, following the Bergen County Tournament championship. (Click on photo for larger image).

So, when Guevarra laced a two-run single in a decisive fourth inning, which gave IHA a 4-0 lead, it wasn’t surprising that Sunday Silence was in the middle of the rally.

IHA, behind Taylor Gallagher’s three hits, as well as two hits each from Taylor Kenerson (Point Given), Sonia Sharma and Sarah Siclari, along with another brilliant effort from junior lefty Olivia Sprofera (Southpaw Seattle Slew) went on to its 24th straight win, and first Bergen County Tournament title in three years, by defeating a good Indian Hills squad, 7-0, on May 22, at Mahwah High School. 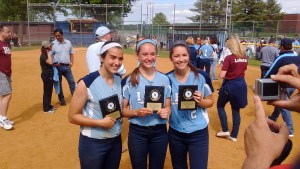 IHA (25-1) will have a few days off before playing at Morris Knolls, in an independent game on May 26. The Eagles conclude its regular season a day later, at Cedar Grove, then prepare for the first round of the Non-Public A state championship, after Memorial Day weekend. IHA won the Non-Public A crown last season. 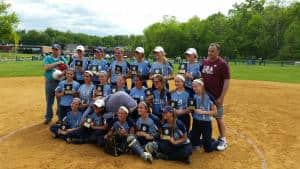 Joe LaRezza (far right, back row), joined the team for a post-game photo. (Click on photo for larger image)

Sprofera’s effort continued to accentuate the incredible pitching by the Eagles this year. It was the second straight shutout and eighth in the last nine games. In 24 of its games, the Eagles have allowed one run, or less. The last time a team scored more than a run against IHA was on April 11, the fifth game of the year, when Holy Angels scored twice, in a 12-2 loss. During the run to the Bergen County championship, IHA pitching allowed one run in 33 innings. 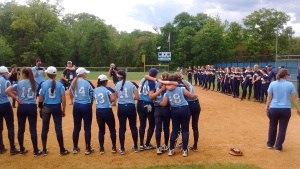 “I thought we were much looser today than in the semifinals (a 4-0 win over Dumont on May 21),” said Fasano. “Our kids were having fun, before, and during the game. It was good to see. We’re not done yet, but this is something we can enjoy for a little while. I’m just so happy for these kids. They’ve been through a lot.”

Sprofera, who is extremely low-keyed in the circle, struck out the side in the first two innings, then seemed to let her defense do a lot more work as the game progressed. Sprofera allowed just one hit, a bunt single to lead off the seventh inning, while striking out nine, and walking two.

“The defense on this team is tremendous,” said Sprofera. “I knew if I threw strikes, they’d make the plays behind me.”

Senior first baseman Emilie Cieslak (Tim Tam) took in the post-game celebration with a smile. The Duke-bound Cieslak was on a county champion at IHA in her freshman year, 2013, then played on a pair of BCT runner up teams, the past two seasons.

“Yeah, this is nice,” said the affable Cieslak. “I remember winning it as a freshman, but now, as a senior and leader on this team, it’s really special. We take a lot of pride in playing well in this tournament. It means a lot.”

Sarah Browning, Victoria Casey and (The) Reagan (Revolution) Jones also had hits, with Jones’ single driving in the game’s first run in the second inning. Jones seems to have a specialty about accounting for the first, or last run, in a key game. In the 2015 state final, she scored the game’s only run, in the bottom of the seventh, to clinch a state championship. In the season opener this spring, Reagan scored her team’s first run of the season. And today, she drove home the first run of the game.

The post-game celebration included a moving moment. As the teams lined up for the trophies, a new plaque was displayed. 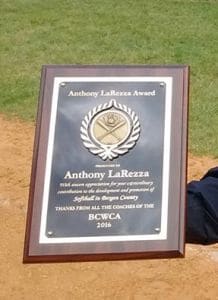 A special plaque for a legendary coach. (Click on photo for larger image).

The first Anthony LaRezza Award, For Extraordinary Contributions to the Development and Promotion of Softball in Bergen County, was, appropriately presented by the BCWCA, to the IHA coaching staff. The Anthony LaRezza Award, of course, is in memory of IHA’s legendary coach, who died on Feb. 4, 2016. The award will be presented, annually, to someone deemed deserving of carrying on LaRezza’s legacy, within the county tournament. 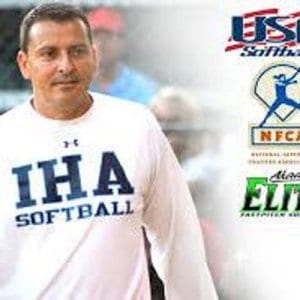 While the award was being handed out, the emotions carried over, somewhat, in the eyes of the IHA players, and some parents, as well.

“I got pretty choked up, when that award was presented,” said Bob Jones, Reagan’s dad, who is a regular at every IHA game.

Anthony’s brother, Joe LaRezza, has also been in attendance for most of the team’s games this year, and enjoyed watching the Eagles celebrate a title.