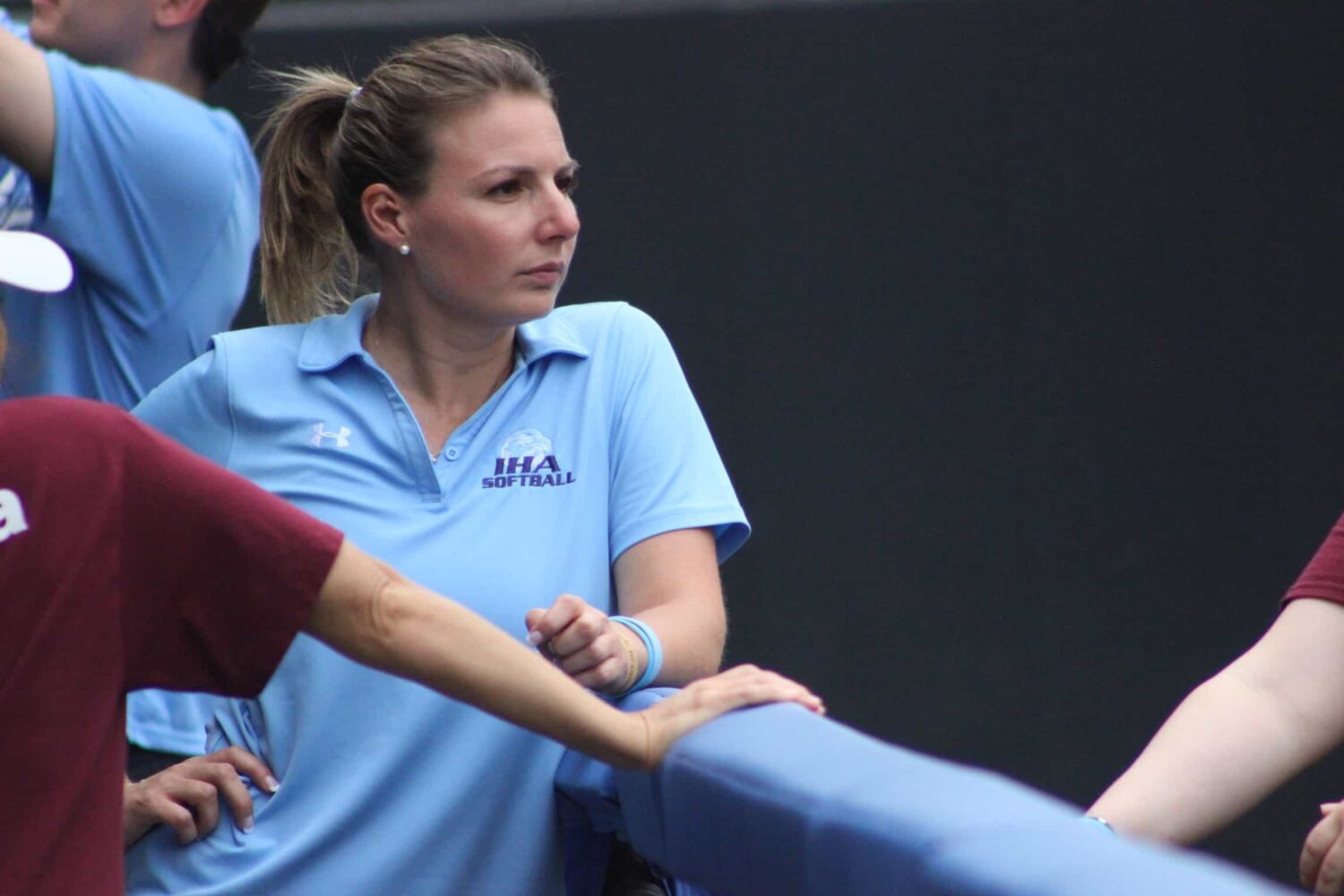 Welcome to the new Varsity Aces blog. We are coming up on our 10th anniversary in a few months, yes, we have some plans for something special.

But we start with sort of an old story. Today in the 43rd Annual Bergen County Softball Tournament, IHA won its 10th county title – the most by far, of any program. Yet, from the start, this was going to be different for the Blue Eagles. It was a different setting (Mahwah did a great job – candy bag prizes?!), a new coach (Diana Fasano, who made history) but no Anthony LaRezza.

LaRezza, if you’re reading this you probably know, died suddenly at age 50 from complications due to tongue cancer. His death shocked the North Jersey softball community. And one of the first things Fasano said to me today was, “Anthony loved this,” meaning the Bergen tournament. And it’s true, he did. He used to fill out his own hand-written bracket (this is kind of pre-internet days) and would call me for scores and updates. We would debate seeding and match-ups, and man, how he hated to play at Ramapo. But that’s a whole other story.

Coming into this season IHA was, at least to me, the favorite to win this title. But the biggest issue was going to be how would they cope with the death of their coach. LaRezza had good relationships with his players and coaches and parents. He was, at times, the fun coach, but he also had their respect too for his knowledge of the game. He had won a lot of games, coached all over the country in summer ball (one of my favorite things…when he would get mad an umpire, he would scream ‘I’ve coached all over the country and that’s the worst call I’ve ever seen’).

IHA was seeded 3rd by the committee. They had 1 loss, to DePaul (themselves county champs in Passaic County). This was the 1st time since 2003 that the Bergen final didn’t have either the 1 or 2 seeds in it. Indian Hills was the 4.

On the opposite side of the field today for IHA was a extremely worthy foe. I only had a few minutes this afternoon before the game to look it up in my archives. This was the 4th time since 2010 these 2 teams had met in the finals. The last time they met in the finals, well, it may be the best game of the decade. No seriously. I dont say that lightly. IHA going for 4 in a row, Indian Hills in their prime….a walk-off homer by Madison Levine for Indian Hills to win it. The Lady Braves going on to win a state title, undefeated. I mean, it doesnt get any better.  And Indian Hills and Joe Leicht are proof, PROOF, that public school programs don’t have to take a backseat to non-public school programs, it just takes a lot of work. Joe and his staff work tirelessly with the girls in town, they have made playing Indian Hills softball the thing to do. And listen, they are young too. They could be back next year in this same spot.

Today, we still had some players on both sides who were there in 2014. (The two teams also met in last year’s semis with IHA winning, Highlands won the county title over a sloppy IHA). I wondered if they were thinking about it. Fasano said no, but the girls I talked to for IHA said, absolutely. It was that type of game, you don’t forget it.

As far as today’s game….well, not much you can say. IHA just nicked and nicked Indian Hills. That’s what they can do. They are so strong in the line-up, and once one girl gets a hit, they are like pirahnas. Click-Click. IHA junior P Olivia Sprofera, a Mahwah resident playing not too far from her home, allowed a first-inning walk, then a seventh inning infield single. The Lady Braves just didn’t have it today. Meanwhile, IHA was on cruise control. A couple of hits here, some speed forcing a couple of Indian Hills errors. Once IHA went ahead, it was over.

After the victory, the IHA celebration was a little muted I thought. Then I kind of realized, this group of girls and coaches has been through an emotional wringer all season. I dont think it was that they weren’t emotional. They were. But I wondered if maybe they felt they had/have showed so much emotion this year that it wasn’t the right time. Who knows? I give Fasano a lot of credit, and even wrote in my column tomorrow that the Blue Eagles have carried a heavy burden this year, but they have carried it well. It hasn’t weighed them down at all. In fact, it gave them wings today. IHA wore “SuperCam” t-shirts in warm-ups for Cam Forte, the son of former IHA star Jackie Turco, now the Hawthorne coach. I finally got to meet Cam myself, in fact, I caught Mom and Dad trying to change a fussy Cam before the game.

I asked Fasano after the game about her tears, because the last time I talked to her, gee, 6 weeks ago, she talked about at some point moving on from mourning LaRezza and talking about him all the time. And she’s right. Thats part of the grief process too. Everyone has to go through it differently. Reese Guevarra told me she hears Anthony’s voice in her head every day. Taylor Gallagher said when the sun came out at the end of the game, that was a sign from LaRezza that he was happy. And it is a different stage of grief, you know the physical person is gone, but you retain your memories and derive comfort from those. So the sadness eventually gets replaced by something different, not joy, not happiness, just….well, real life. Whats the sports cliche, don’t cry because its over, smile because it happened?

Anyway, Fasano became the 2nd person in the tournament’s history to win the county title as a player and a coach. Leslie Stephen won 3 county titles with Ramapo and won it as a player in 1978, back when they still used white balls. (Just kidding, sort of). The Blue Eagles have a whole week before they open up State Tournament play. The Blue Eagles do not have an easy road. They may see DePaul again in the semifinals, then Mount St. Dominic in the sectional final. And Vianney awaits, like they usually do. LaRezza loved this time of year too. He would have been proud of his team today. They took another step forward, away from him, but honoring him at the same time.