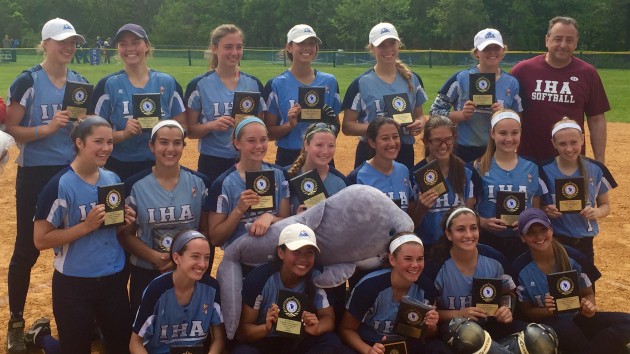 Olivia Sprofera has pitched no-hitters before, but she had never experienced a Bergen County Tournament championship.

The junior left-hander from Immaculate Heart took a no-hitter into the seventh inning of the BCT title game against Indian Hills on Sunday, but lost that bid on a bunt single to start the frame.

Her third-seeded team happened to be ahead by seven runs at the time, so she was perfectly willing to settle.

“I wasn’t even thinking about a no-hitter,” she said. “I just had to keep hitting my spots and I knew that my defense would keep making plays.”

In a contest that lacked any of the drama that accompanied county final losses the previous two years, Immaculate Heart scored in every inning except the first when it beat fourth-seeded Indian Hills, 7-0, in Mahwah.

Sprofera (17-1) struck out nine and allowed one walk, which came in the first inning.

The Blue Eagles outscored their five county tournament opponents by a combined score of 42-1.

The county championship was the program’s 10th, which extends a record it already held.

But the Blue Eagles had been beaten in the last two title games, by Indian Hills on a walk-off home run in 2014, and by Northern Highlands after a disastrous first inning last spring.

This time, Immaculate Heart generated 13 hits, led by cleanup batter Sonia Sharma finishing 3-for-4 with two runs and one RBI and fifth batter Taylor Gallagher going 4-for-4 with one run and two RBI.

The Immaculate Heart defense was also flawless, with third baseman Reagan Jones and shortstop Taylor Kenerson making a number of impressive plays to back Sprofera’s gem.

Jones knocked in the first run in the bottom of the second. The inning began with singles by Gallagher and Sarah Siclari, and Jones was supposed to bunt them off into scoring position. But after fouling off two attempts, she swung away and delivered a RBI single to left field.

“Once I didn’t get the bunt down, I knew I had to hit the ball,” she said. “One through nine, we all hit today, and we all contributed to the seven runs.”

The Blue Eagles extended their lead on a two-out RBI single by Gallagher on the third and a two-run base hit by Reese Guevarra in the fourth.

An Indian Hills error resulted in a 5-0 score in the fifth, while Sharma and Gallagher each had a RBI single with two out in the sixth.

The all-around showing was a relief for Immaculate Heart coach Diana Fasano, who started on the IHA team that won the county title in 1999. That group went on to win a state championship, which this team will now hope to do.

The program has won 10 Non-Public A state titles, including the 2015 crown. But only five of those teams were able to win a county championship beforehand.

“Today we came ready to hit,” Fasano said. “Olivia was lights out. She is extremely focused in situations. And our defense was incredible. Even if the ball gets put in play, we make plays. Our overall game is very good right now. We got hit pretty bad in this game last year, so after getting ahead early, and then to keep putting up runs, I couldn’t ask for anything more.

“This is such a tough tournament to win,” she said. “There are so many upsets. It’s not about who’s supposed to win on paper, it’s about having to come to play every day. We did a great job with that this year. Every game, in every round, we were in charge.”

The team also wanted to win for Anthony LaRezza, the team’s beloved coach who died of cancer complications in February. His brother, Joe, has become a regular at games this year and was on hand to witness the championship.

The sponsoring Bergen County Women’s Coaches Association also announced the launch of an Anthony LaRezza Award for service to Bergen softball that will be presented at the final each year. The first recipient was Anthony himself, and the team accepted in his honor after the win.

“This was for Anthony,” said Jones. “That drove us more than anything. We needed it.”